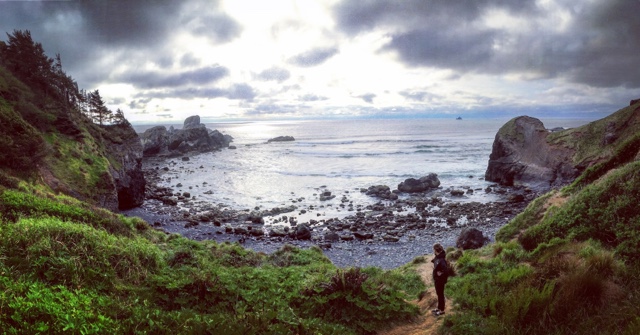 Portland was definitely more than I expected it would be. It was more lush, the city was bigger than I imagined, and there were more this restaurants than cafes. There was also more of a homeless population than I expected where they would pitch thir tent right on the sidewalk in the middle of the cities busy streets. This is a round up summary post on Portlandia's best scenic spots, food, and breweries that we saw. 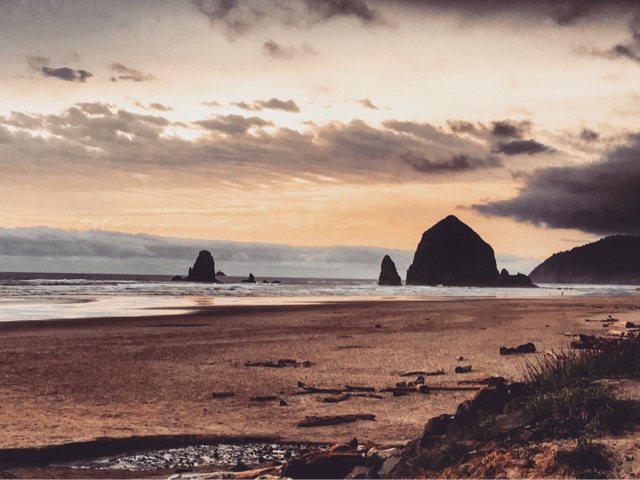 We almost didn't make it to Cannon beach because it required us to rent a car and drive an hour and a half to the coast and back totaling 3 hours. But the sights of the coastline, and being able to physically touch the Pacific Ocean was well worth it. There used to be the Goonies house where they filmed the movie that you were able to go in to, but they closed it down to viewing. 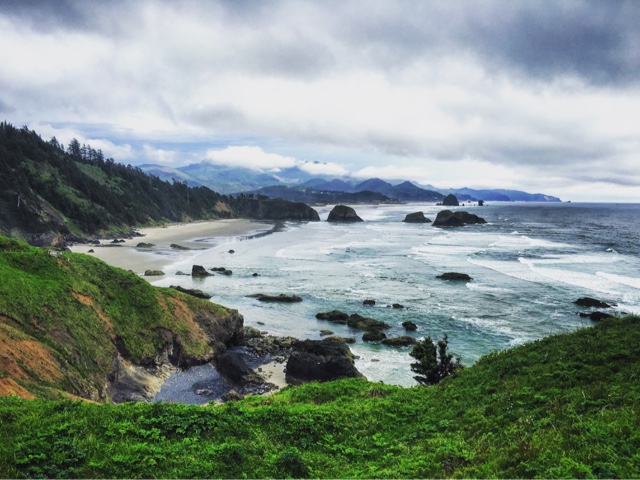 This was one of the first sights of Cannon Beach after you park. The mountains had these clouds over them in the distance, and there was a slight cloud overcast, but it was breathtaking. 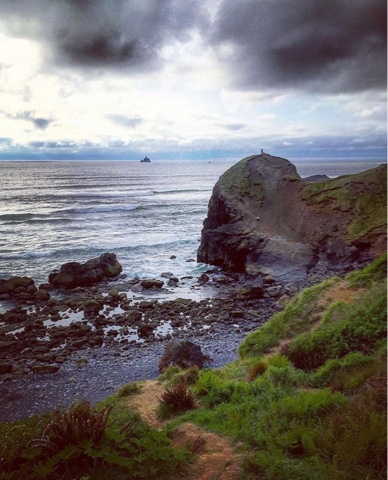 That is a lighthouse in the distance atop a large rock. On the closer tall rock was a dog and their owner. The owner was on top, while the dog kept running up and down. We watched in awe as it looked very steep like the dog would slip and fall into the rocky ocean below. 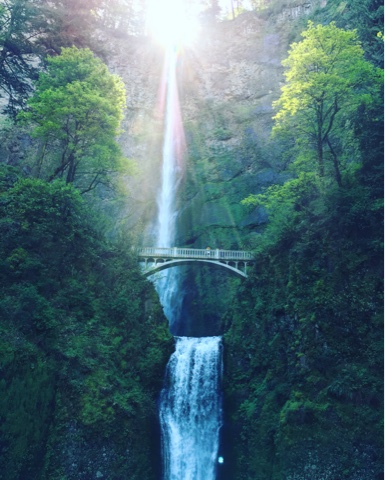 Multnomah falls is definitely a must see. It is MASSIVE. It looks tiny in these pictures. This shot was right as you were walking up. Trails to hike were beside it. 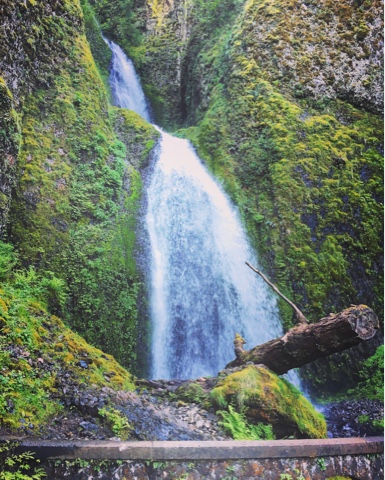 There were many waterfalls on the way up and down the mountain. We did a 5 mile loop but there are other trails to hike longer. It took about an hour and a half or so to complete the loop. Most of it was paved and it was steep for a short period of time, and there was a lot of switchbacks. 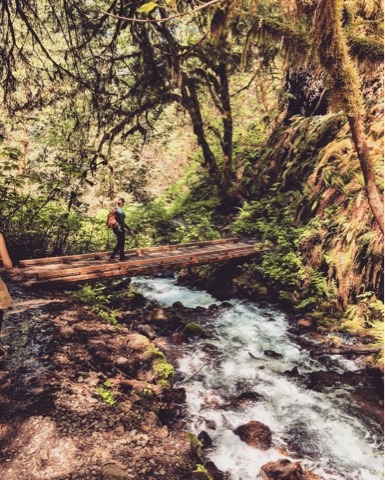 This bridge looked brand new. A relief to some of the water crossings we needed to take. 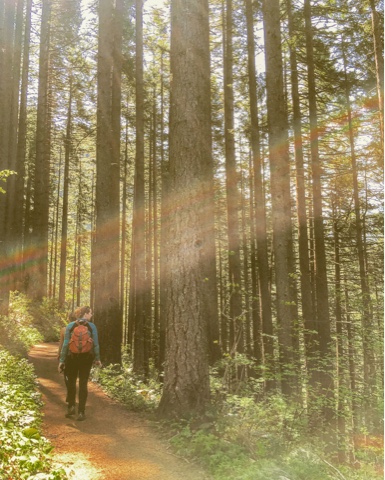 The trees were so tall and old. Moss grew on everything, even the branches, and there were ferns everywhere. 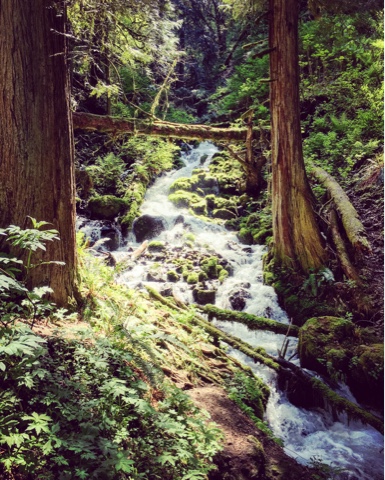 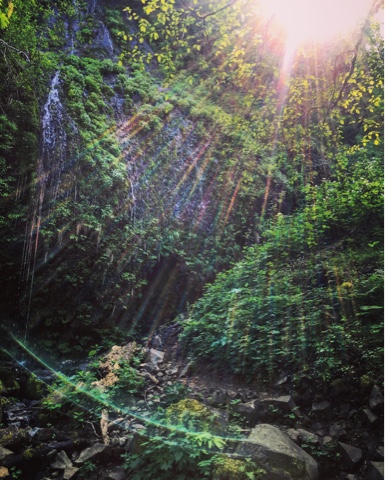 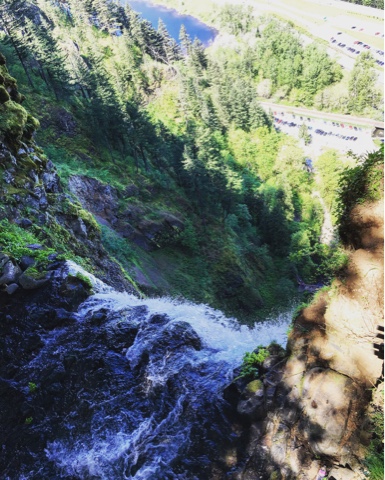 It's a long way down. 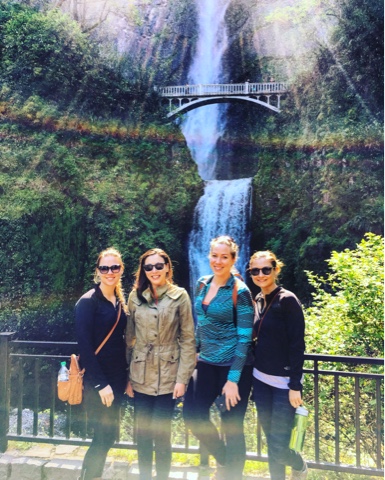 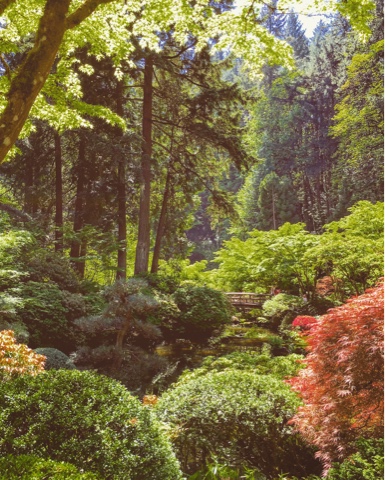 This was the Japanese garden. Lots of bridges and pretty vegetation. 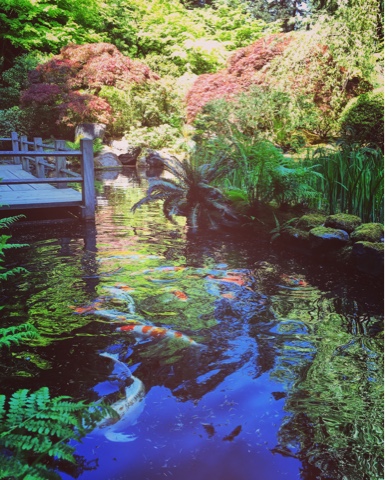 And GIANT koi fish. There was a separate pond with little baby koi fish. 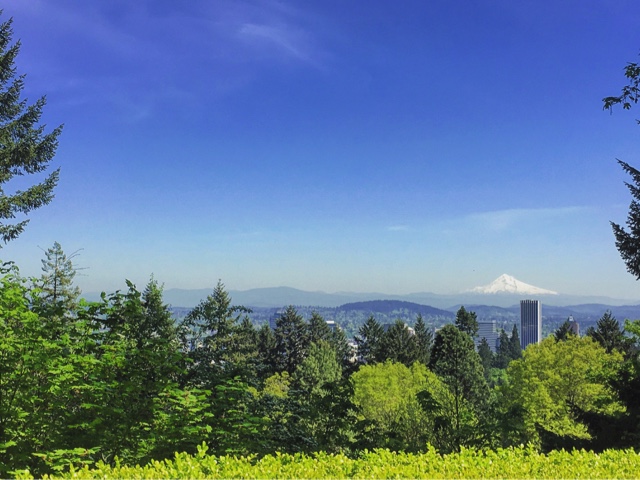 This was the view as you approached the top of the Japanese gardens. Beautiful. 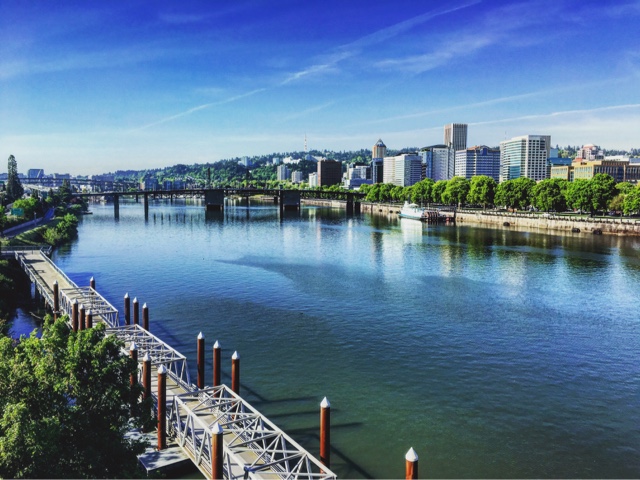 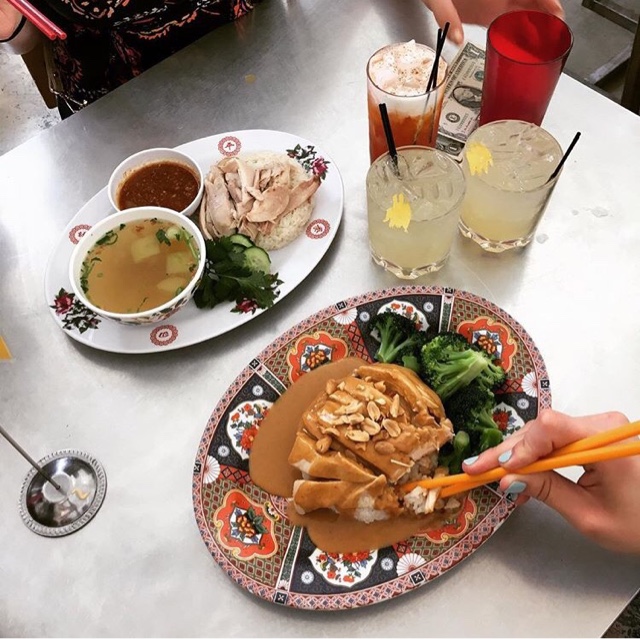 And then there was the FOOD. We had some pretty fantastic food on this trip. These are photos from some of our favorites. Nong's Khao Man Gai was definitely top of the list. We even bought the sauce to take home. Surprisingly, the non peanut one was tastier, just because of the sauce that came with it. 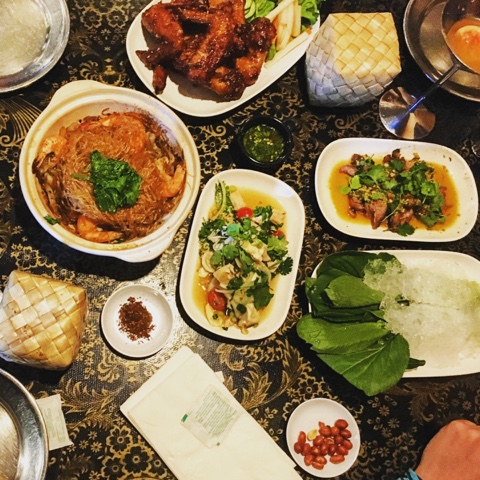 Pok Pok not only has a cookbook by them, but the chef won a James Beard award in 2011, and Guy Fiery paid a visit. It was authentic Thai food at its finest. 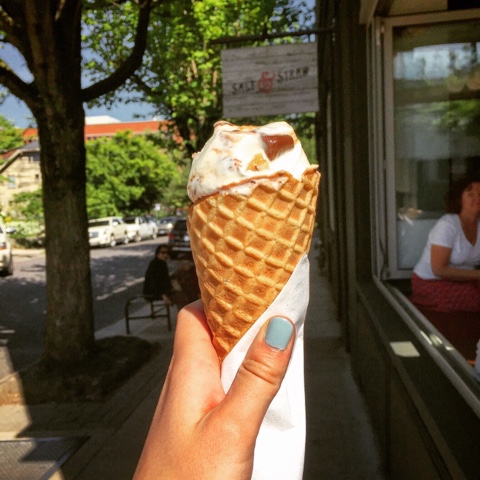 Then there was Salt & Straw. So many distinctly different and unusually pleasant flavors. 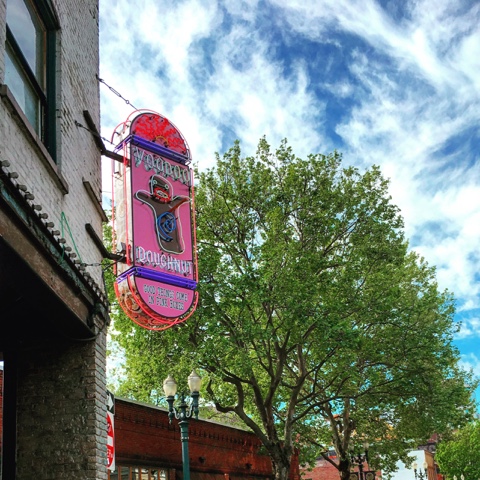 Voodoo doughnuts. Why don't we have an artisanal craft doughnut shop in Portsmouth? Pull up their website to see all their crazy concoctions. 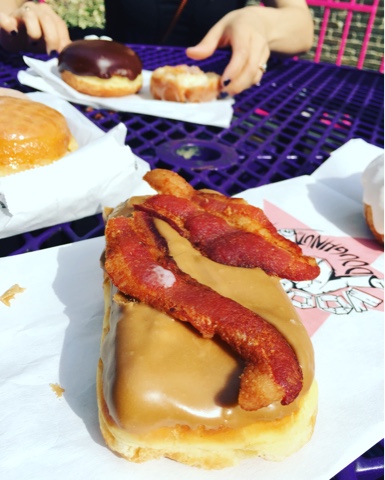 I bought this number again and brought it back home it was so good. 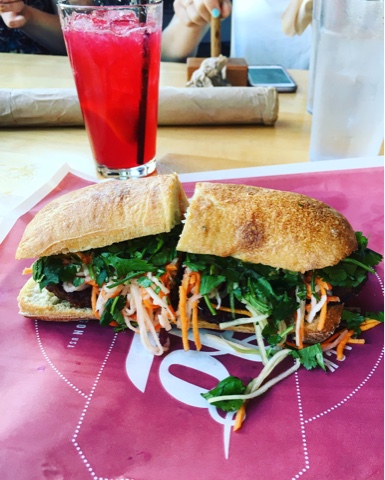 Lardo has a special place in my heart with this pork meatball Bahn mi with pickled veg and cilantro. 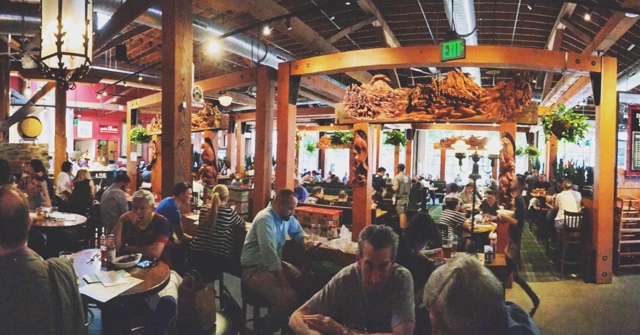 Deschutes brewery was one of my favorites. Really cool atmosphere and tasty beer. They had a really good signature beer called Pine drops that did have a soft hint of pine. 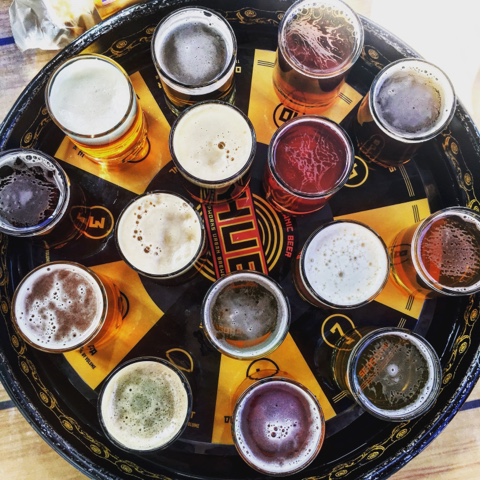 Hopworks also had a great selection and a nice outdoor patio. 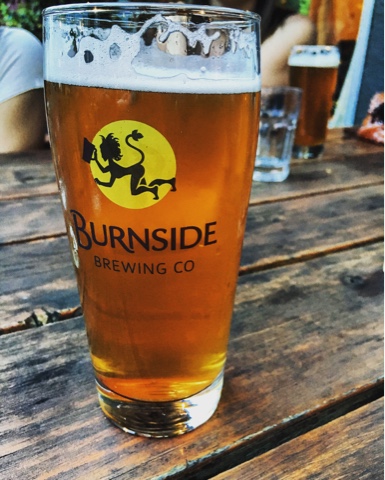 Burnside was probably our favorite brewery. We came back here twice since it was so close and got beer to bring back home.

I love Portland, OR. There were definitely some areas I could see myself living in, but it doesn't compare to the quaint, close-knit community of Portsmouth, NH.

Start from the beginning and read about all 5 days here at Portland, OR: day 1