It's a beautiful thing to be in a beautiful place. It's another when you're bringing your unborn child for their first international trip for a last trip before sleepless nights and everything baby.

Why Iceland this time of year instead of something warmer? Well, we wanted to see Iceland anyway for many reasons. Not just for the Northern lights, their puffins, and their whales, but also for their stunning landscape, natural geothermal pools and their culture. Our Doctor also recommended it since Zika is everywhere warm so it was a done deal to go before I got too big and uncomfortable and couldn't fly on a plane (which is past 32 weeks). 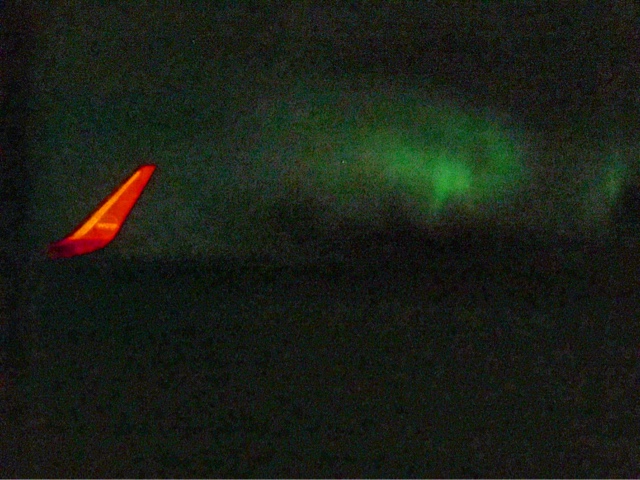 We were surprised when the flight attendants told us to look outside for a surprise and shut off all the lights on the plane to see this view right from the plane. The Northern lights! Obviously these iPhone photos don't do it anywhere near justice and are much better in real life! 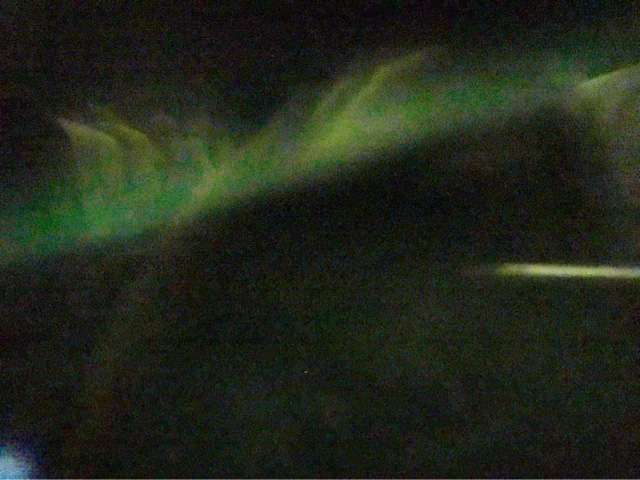 This one was much bigger and had pink and purple at the tops. They were just streaks of colorful clouds dancing across the sky before our eyes. I've never seen anything like it. Hopefully we can get better pictures another night with our DSLR camera. 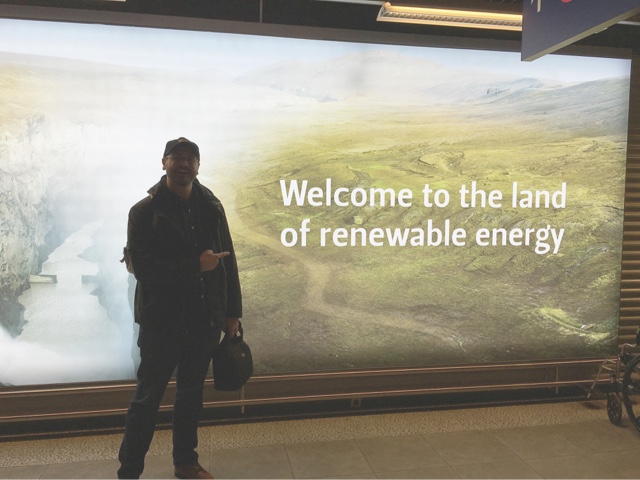 We knew Iceland was all about renewables with their geothermal heat and this made Mike pleased. It's also the country with the most active volcanos in the world. 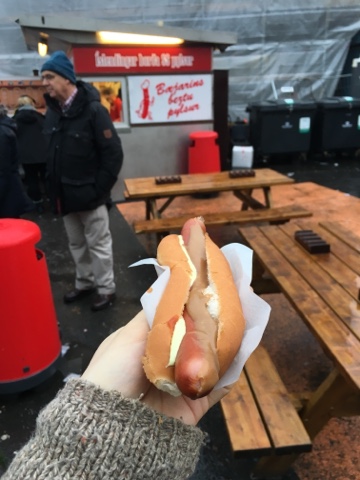 After dropping off our stuff at the Grand Hotel Reykjavik where we were staying, we took our rental car and drove 10 minutes to get to downtown. There's a big flea market that happens every Saturday, but we had to grab food first! Apparently loaded lamb hotdogs are a thing in Iceland. The line outside the food truck proves it. 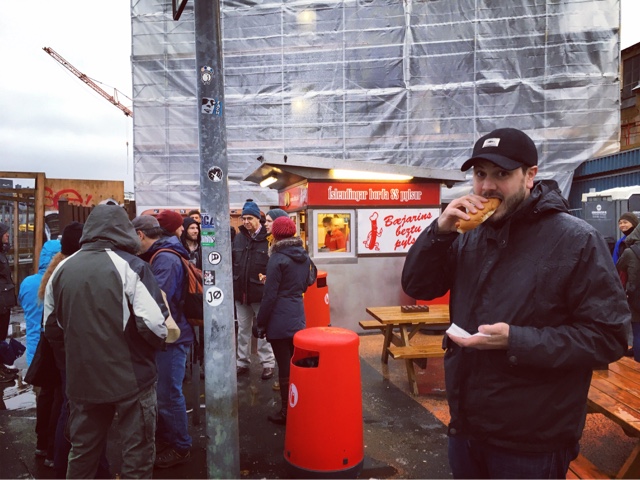 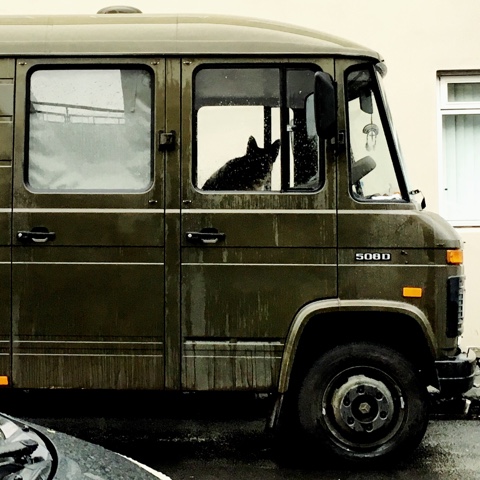 While walking with our dogs, we saw this dog chilling in an old badass van. 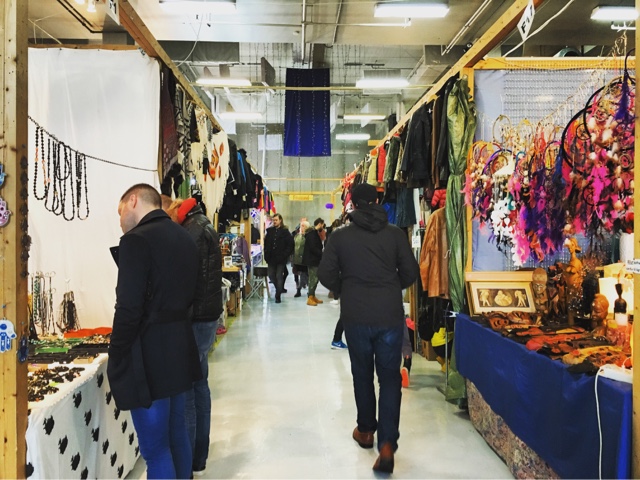 The flea market had all kinds of handmade things. We spotted a cute handmade Icelandic sheep wool sweater for baby girl and had to get it. 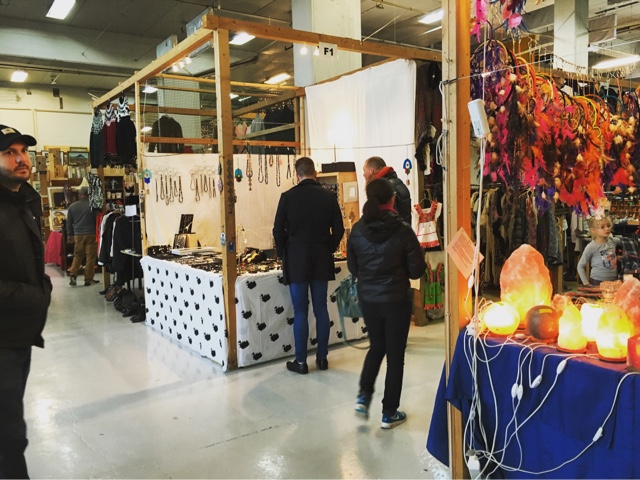 Lots of odds and ends but mostly clothing. 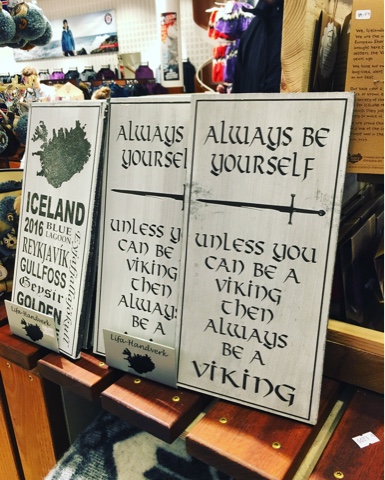 Loved these signs! The Viking sign spoke to our family's heritage from Norway. People here either thought I was Icelandic or some kind of Scandinavian. Until I spoke English of course. One of the guys at one of the shops mentioned it to us as we were checking out. I remembered in Copenhagen, Denmark people asked me for directions twice! 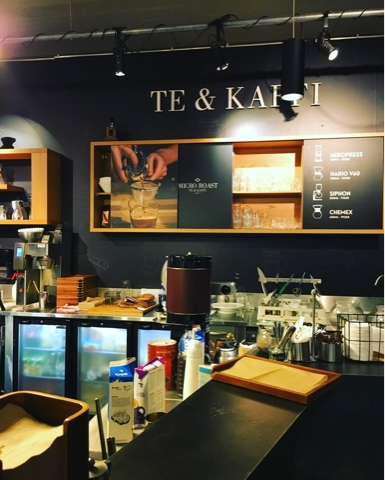 Grabbed a quick cafe Americano here. Te & Kaffe is like the Starbucks of Iceland. 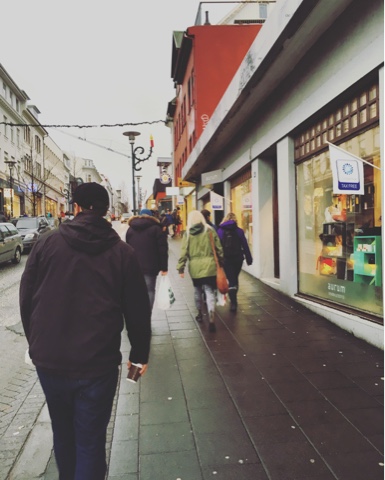 On the prowl to find some sweet Icelandic sweaters and gifts! 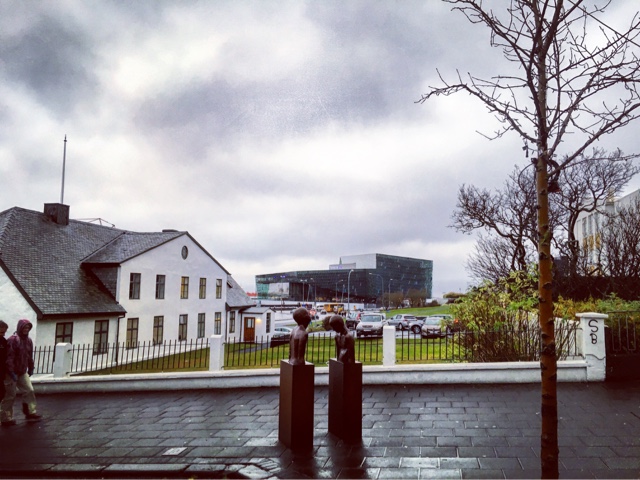 There's the Harpa concert hall in the distance. The architect who built it was Olafur Eliasson. We didn't get the chance to see it today but will get it in the next few days! 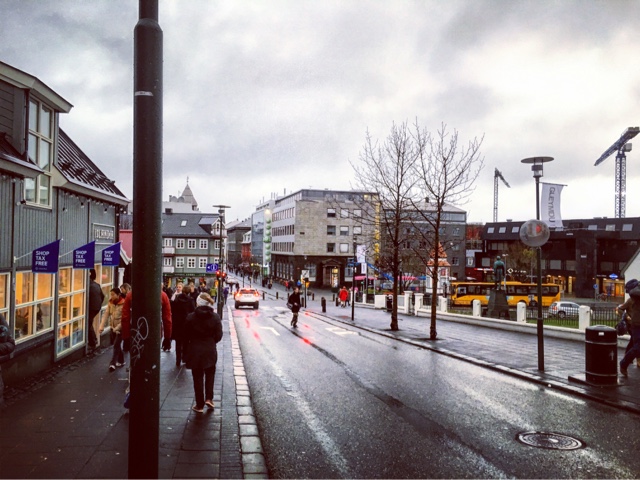 Streets of Reykjavik! There are lots of colorful buildings and some graffiti like any populated city. Icelands population for the country is around 330,000 total! That's about the size of Boston! 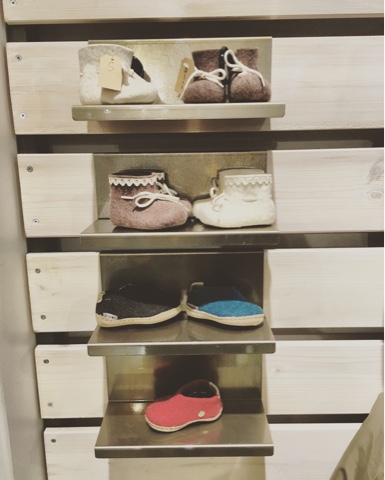 These booties were irresistible. But I resisted. 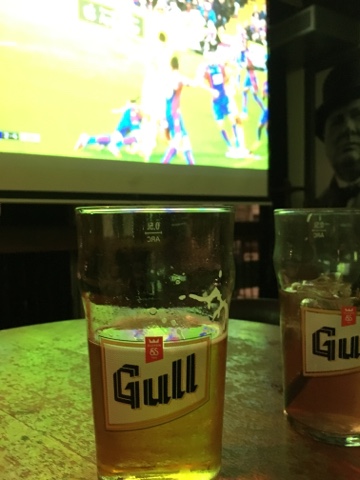 After finding our wool sweaters, we went to an English pub where it was packed full of people watching fútbol. I ordered a soda water and cran with lime. Mike got an Icelandic beer. 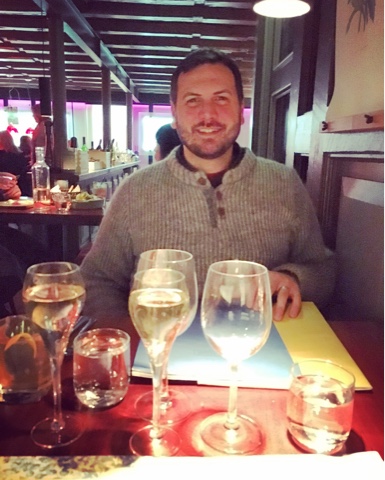 We made reservations at Matarkjallarin Foodcellar for my birthday dinner where we had a delicious meal! 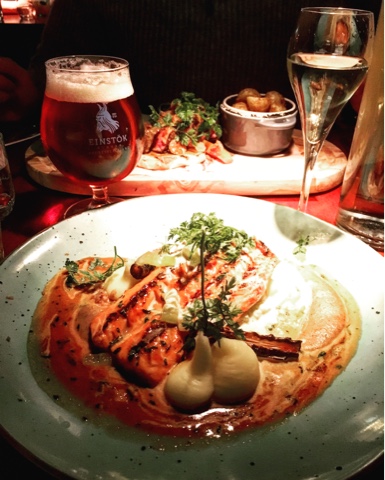 I heard ahead of time that Icelandic food was salty, saucy and well spiced which was dead right and so good. We tried puffin & duck with blueberry for an appetizer and it was surprisingly good. Puffin tasted a lot like duck which is probably why they paired them together. More on the gamey side. I got the salmon with apple and grilled artichoke for my entree, and Mike got the pepper steak with portobello mushroom and roasted potatoes. 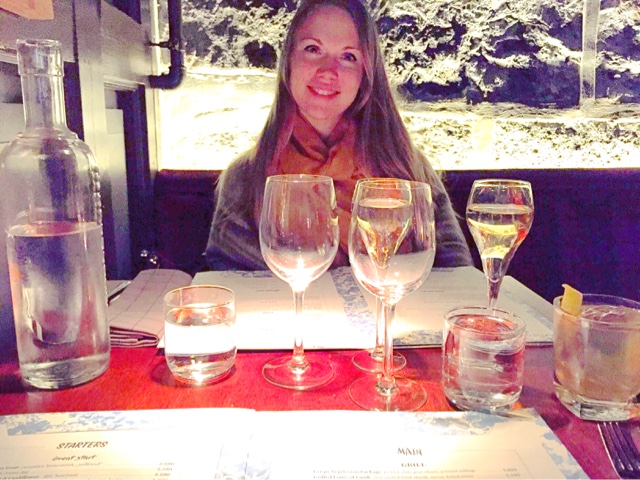 We went back to the hotel and grabbed a drink in their swanky lounge. We stared hearing cheers from one of their large conference rooms nearby. Little did we know, they were holding and filming a political event for one of their most popular parties! We turned on the tv upstairs when we went back to our room and they were airing it on the news on a couple different channels! Apparently there's a lot of controversy about a "Pirate party" in Iceland where people view them and the person running here like Trump and Hillary in our election. Many people follow the news about the states here. The guy that was checking us out at one of the shops asked us about it! 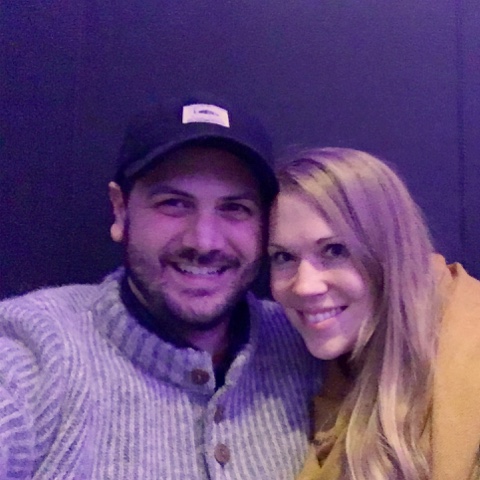 We didn't stay up too late as we have an early day of sight-seeing tomorrow, but I enjoyed a hot cocoa while Mike enjoyed an Icelandic beer before heading to bed. 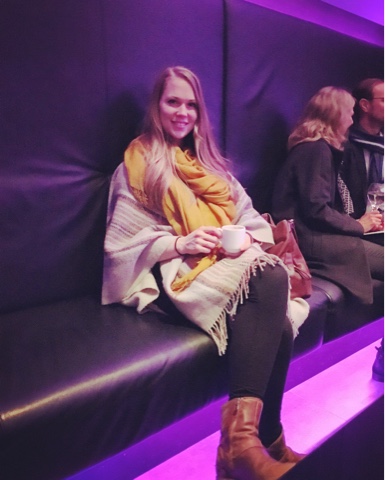 Here's the new Icelandic wool poncho I got! You can see Mike's in the photo in the restaurant above. Sooo cozy.

Tomorrow we plan to drive through the golden circle which has geysers, craters and waterfalls, oh my!

What an amazing birthday here in Iceland. 29 will definitely be a year to remember!