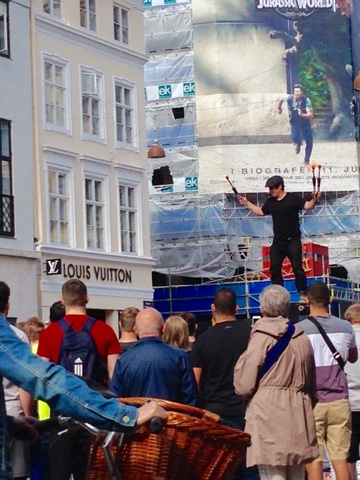 This guy just pulled up and drew a large crowd within minutes. He spoke English, and claimed that he was going to do something dangerous that involves fire all while throwing knives from the ground out of a suitcase, as well as a skateboard, and torches. In the pic above he is balanced on a suitcase, a table, another suitcase, and a skateboard   All while juggling with lit torches and then putting them out in his mouth. 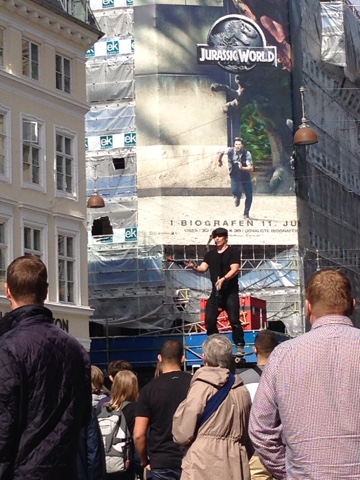 We were sitting down at a restaurant grabbing a quick bite in a busy square which made for some excellent people watching. There was another performer who maybe wasn't all there wearing a panda hat and playing one note on a recorder not to far away. We also started chatting with a couple hilarious older guys from Sweden that scoffed when the performer standing on the table mentioned "the thing that makes me most nervous about this table is that it's from ikea" (originally from Sweden). 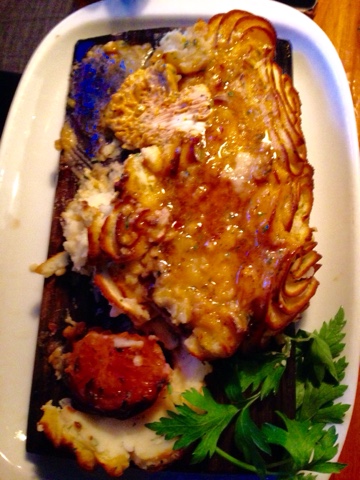 We went back to the hostel for some cappuccino to wake us up a bit and saw our friends from the night before who invited us to a bar that was having a special that night that you pay 60 Danish krones (about 10 bucks) for unlimited beer or one liquor cocktails from 10-1am. Before we met up with them to go around 10, we went to a place across from the hostel called Puk (I thought it was pronounced "puke" and was hope the meal wouldn't invoke that). The meals were actually quite good. I tried to remember to grab a photo in time but Mike already dug in. It was traditional Belgian filet of beef prepared with a layer of seasoned mashed potatoes on top. It was really quite good. I opted for a grilled chicken burger with plum chutney which was fabulous but not as pretty. We went back and mike smoked his Cuban cigar that he got from the oldest cigar shop in Munich on the way to the bar by nyhavn. 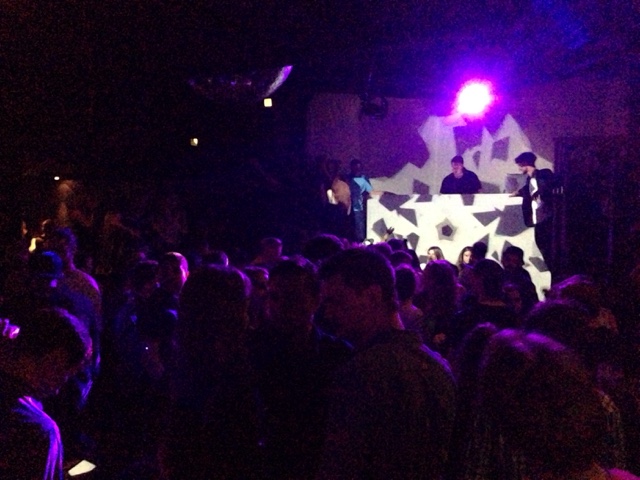 It was packed, and it was hard to get a drink at the bar. Everyone was dancing and there were cages on both corners that even the guys were dancing in. Mike and I commented how we didn't have anything like this back in Portsmouth. It was to the level where the bass went right through you and you couldn't hear anyone unless they got right up in your ear. I guess Copenhagen is known for its party scene, which is completely different from some other spots we've been like Venice which surprisingly didn't have any nightlife at all. We stayed here until about 230 am and worked out way back to the hostel for bed around 3.

Tomorrow is our last day and also the warmest with highs around 67. We are actually going to go to tivoli around dusk and the national museum earlier in the day. Then tomorrow we'll have an 11 hour train to Strasbourg, a place in France that was German and speaks primarily German. The story goes that the French thought the river that went around it was the territory distinction, whereas the Germans thought the mountains are what distinguished it. So they fought for it that way and it became a place where the buildings look like they are from Germany, but there is a strong French influence as well.