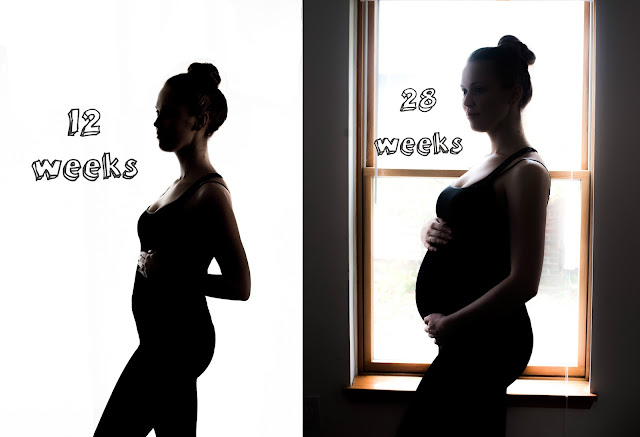 The second trimester was a welcome relief from the third trimester! More energy, no more food aversions, and increased appetite. I almost forgot I was pregnant. Hooray!

The amount of growth from the time I ended my first trimester to the time I'm ending the second trimester is huge. This was at 12 weeks, and at 28 weeks I only have 12 weeks to go until she's here!! Baby girl didn't really start showing and people didn't start asking when I was due until around 6.5 months along. My Mom and my Memere told me this in advance though since that's around when they started showing so I was prepared for it.

I got a lot of questions on what my cravings were. In summer and fall I still couldn't get enough watermelon. As we went on further into the second trimester all I wanted was a salad and sweet potato fries! The only other complaint besides increased discomfort when trying to sleep was the heartburn. No matter how early I ate or how much, the heartburn villain was out to get me. I just use two pillows in addition to my snoogle body pillow to sleep, and sometimes I need to sit up for a minute for it to fully go away.

If you haven't had a chance to catch up on the first trimester yet, check it out here. 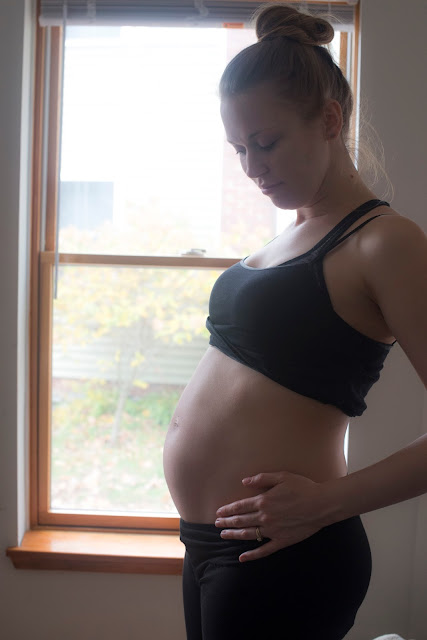 At my 27 week doctors visit I was measuring at 27 weeks (they go by centimeters and it follows the number of weeks you are) so I'm right on track! I've only gained about 8 or 9 pounds so far since I lost so much weight from the food aversions in the first trimester but I'm having no issues gaining weight now! 1 pound in two weeks! It has been harder to exercise not just because of my ever growing belly, but just because of all the weight loss I didn't want to lose any more! I still fit in walks, and take the stairs, though. 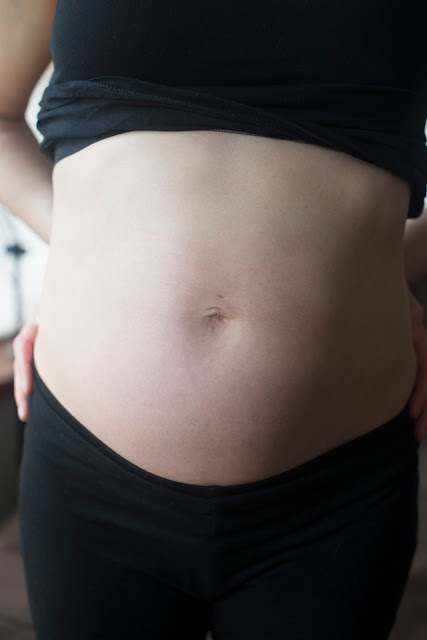 I've been using coconut oil religiously to moisturize and prevent itching and still haven't gotten any stretch marks as of yet. I'm not out of the clear, but I'll embrace those tiger stripes as a badge of honor if I do! 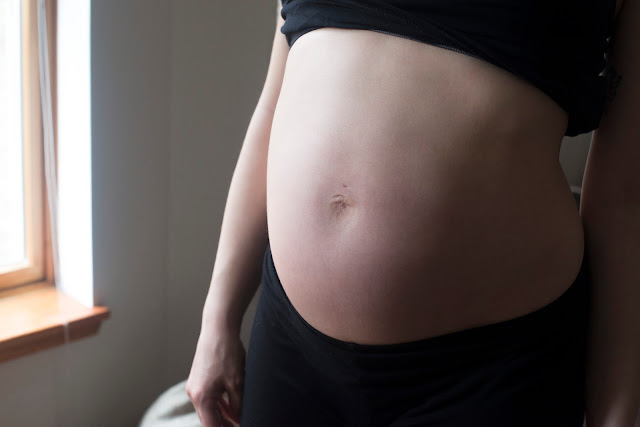 One of my favorite feelings in the world is feeling her move and kick in there. I'll never forget the first time I felt it around 14 weeks. It gives reassurance that everything is okay, that she is going stronger (definitely a few good boots!) and it's fun to play little games with her where I'll rub or poke one area of my belly and she'll kick the same area in response. We started taking childbirth classes together, and our instructor told us to try using a flashlight on the belly to see if they follow or respond. She moved around a little bit, but I think she was startled more than anything. She seems to like the white noise as she gets quiet when people are talking or if I'm moving around, and then as soon as it gets quiet and I'm not doing anything - she starts kicking up a storm! We are going to have our hands full with this dancing/ninja baby! Trying to hold on to these moments while they last for the next couple of months.

At 19 weeks we had our gender ultrasound. We chose to go to Harbor Women's Health where I've heard some great reviews, and they deliver at Portsmouth Hospital where I used to work so it's familiar and comfortable for me. We were originally team green but the anticipation was mounting and we decided to go ahead and find out for planning/bonding purposes. I love her little button nose and her "Halloween" photo on the left!

Our gender reveal was with just Mike and I and we shared a video with our family after. We had the ultrasound tech pick from the balloons we made up ahead of time grouped into the sex they were so we could go home and throw some darts at them to find out what was cooking inside!

We literally needed a gun to pop these balloons! Hilarious! 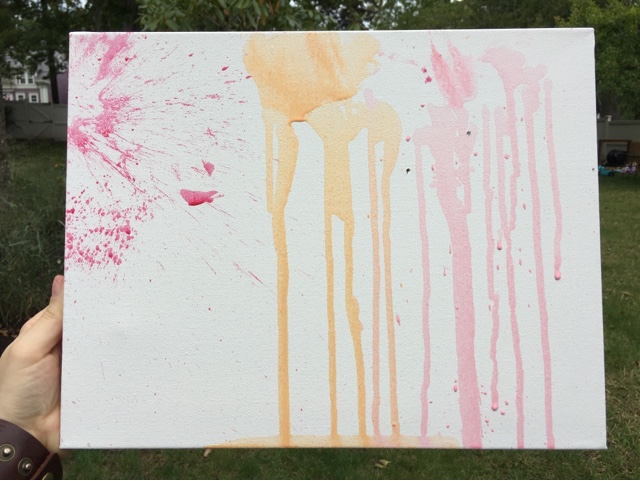 Here was the end result of our paint filled balloons on canvas! It's now hanging in the nursery. 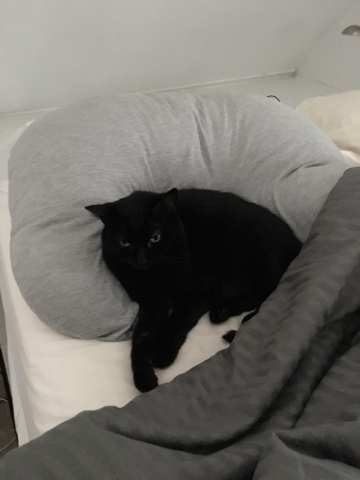 My cat loves my snoogle. I catch her sleeping in it all the time! Although she doesn't really look too pleased here... 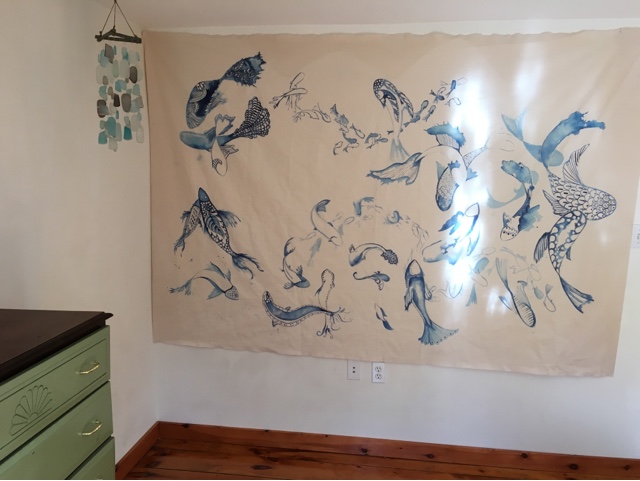 My colleague at work does up beautiful and elaborate displays every season and this one display from summer I totally fell in love with. I had to have it for the nursery so after she switched displays I jumped right on it! So it takes up a whole wall in our nursery and it is magnificent! The crib is going right in front of it.

We went with a seaglass/seafoam green, blushes and white theme. 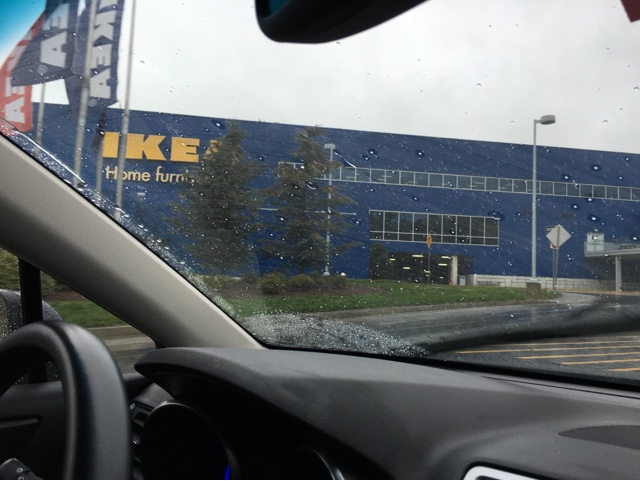 Since we've moved in to the new place, we needed a few new things. I've never been to Ikea and I have to say it really is an institution! They have whole room set ups that you can walk through, and you can literally decorate your whole house from Ikea. 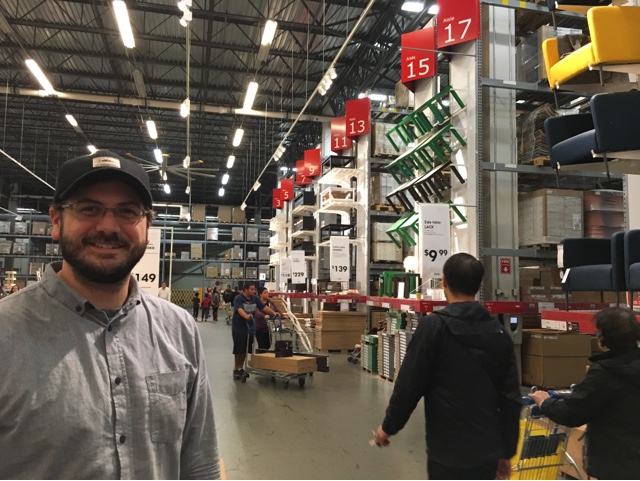 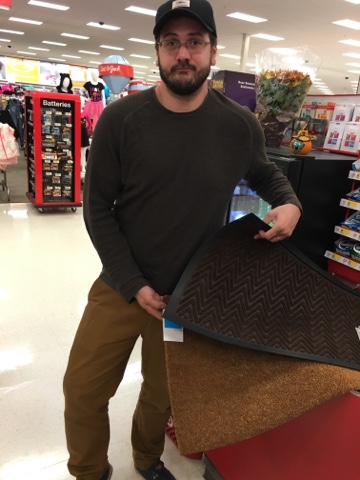 We also had to go to target, obviously. And had to match Mike's outfit. (Unintentional!) 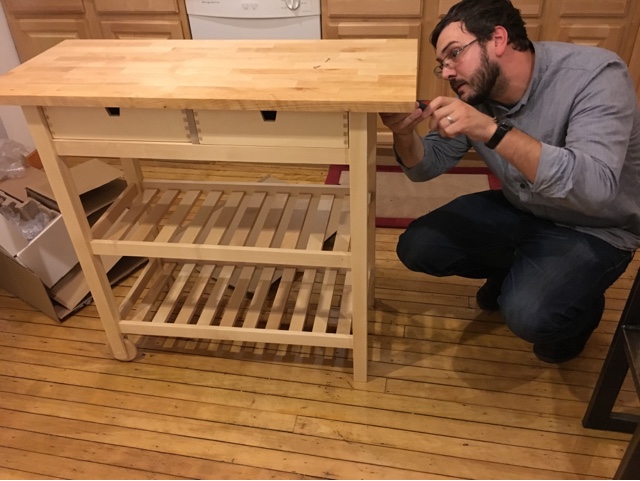 We got this kitchen island for like $100. It is perfect for our kitchen! Mike is such a handy-man. 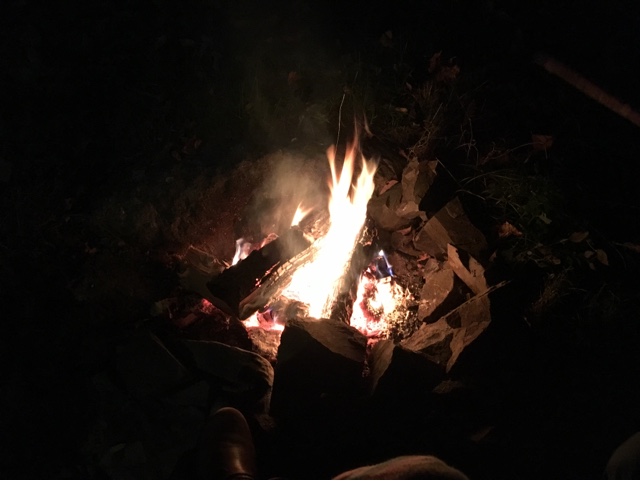 Before the weather got too cold we had some fire out on the deck at our new place with some friends. Let's just say we like it here! 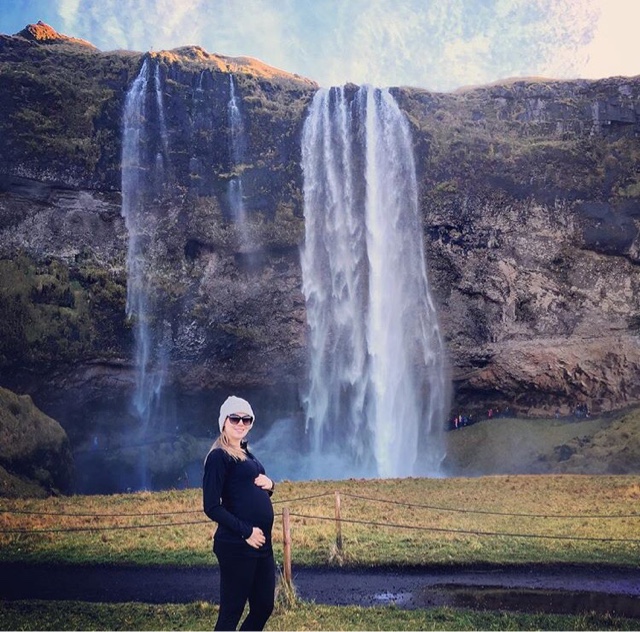 Then we took our baby to Iceland, one last trip before baby girls debut in February. This was my 24 week bump in front of Seljalandsfoss waterfall. Read more about beautiful Iceland here. 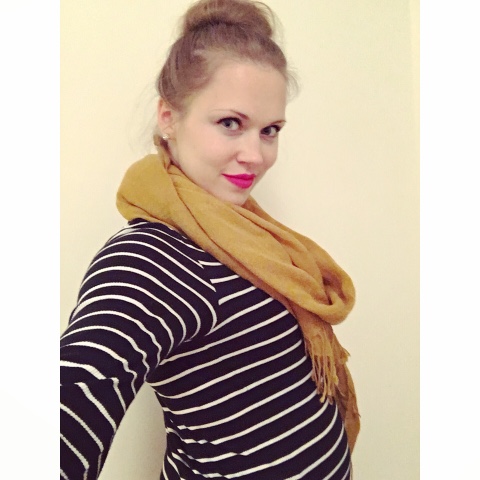 Do these horizontal lines make me look pregnant? 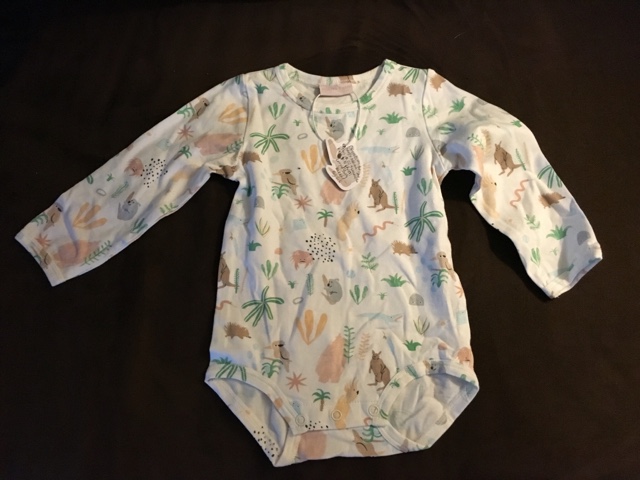 We <3 gifts for baby behr from far away friends. Thanks Marie! 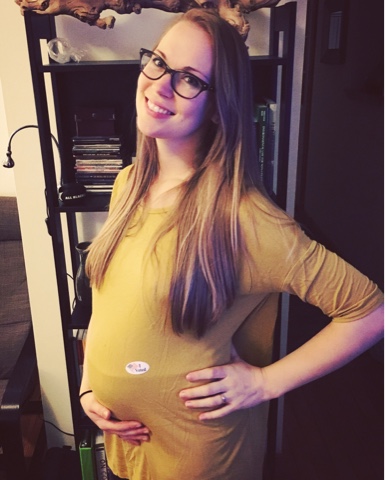 Baby girl voted in the 2016 election! 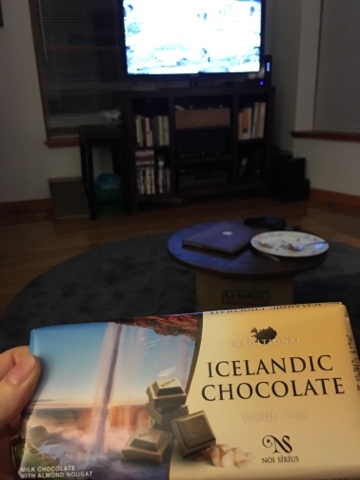 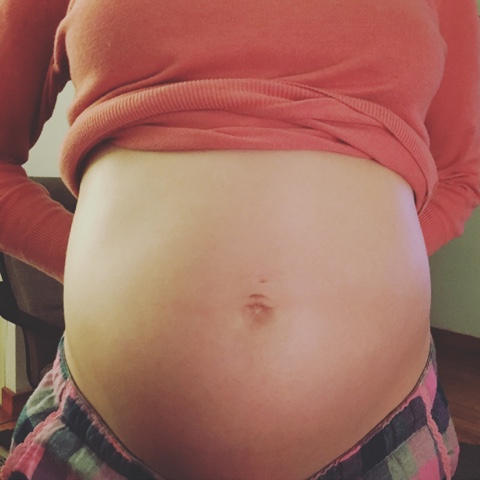 I was so excited when I saw that I started to get linea nigra on my bump! I've been embracing pregnancy and keep telling everyone that I just can't wait to be a house. (We'll see how I feel at 39 weeks.) 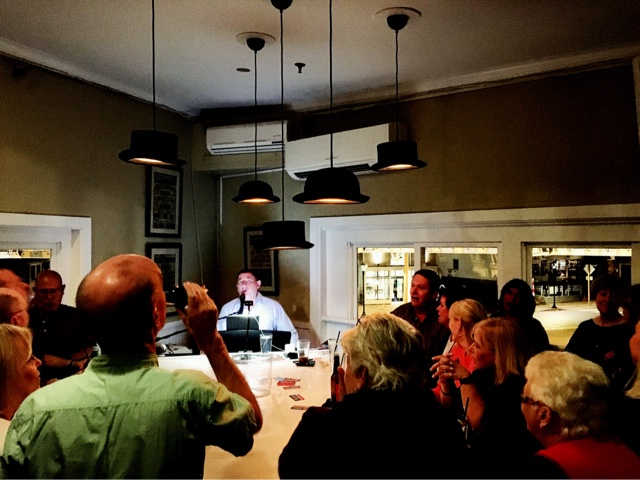 Nights full of mocktails celebrating bachelorette Renee from work! This was at the Front Porch in Exeter where they have a live piano player you can sing along with. A very jubilant crowd on a Saturday night! 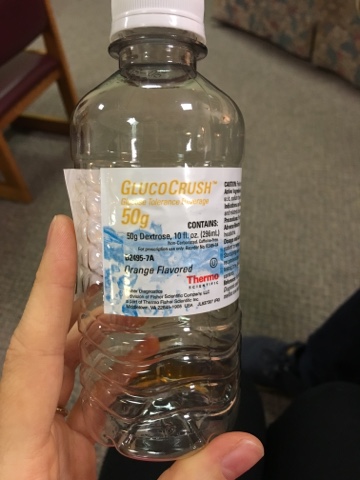 Besides mocktails, I needed to drink this glucose flat orange soda for my 28 week appointment. Definitely wasn't as bad as I thought it would be. I just gulped it down and an hour later I got my blood drawn. I passed! I needed to get below a 130 mg/dL and I got a 109. Now I can eat Thanksgiving dinner with reckless abandon!

Other things I found extremely useful throughout the first and second trimesters were the phone apps that had information for every week of pregnancy. My favorite apps were Ovia, for their videos, and Glow Nurture for logging in whether you took your prenatals and did your kegels (very important!) and other symptoms. I also liked the What to Expect app for their "mom boards." You can post anonymously about anything pregnancy related and get tons of support from other pregnant ladies that have or are going through the same thing you're going through. Baby center was good too for creating a birth plan, and reading about every milestone where they have lots of pregnancy related videos for the week of pregnancy you're in. 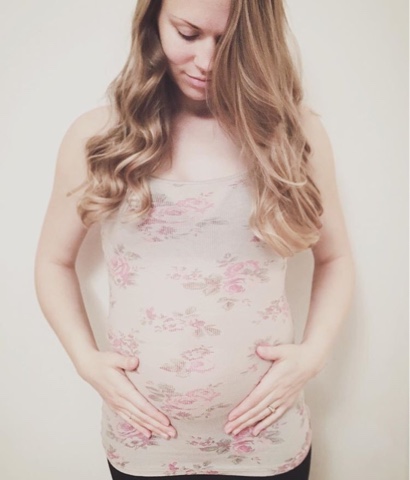 I'm definitely starting to feel more tired and uncomfortable as I walk into the 3rd trimester. I can't believe in that around 2 months we'll be meeting our little girl! Of course my husband Mike has been doing his daddy duties very well, helping with chores and cooking and doing runs when I'm too lazy to cook.

I'm so very thankful for so many things including my amazing husband, my super supportive family, my work family, and for everything going so smoothly (so far so good!). I'm looking into making some bulk freezer meals as I get further into the third trimester (but probably sooner!) so I'll share that in the next trimester post.

Stay tuned for the third trimester news and the birth of our little behr cub. My Mom said she went all natural with all three of us kids and we were all born within 12-14 hours. That gives me more confidence and reassurance and I'm hoping I am so lucky to do the same with this baby! 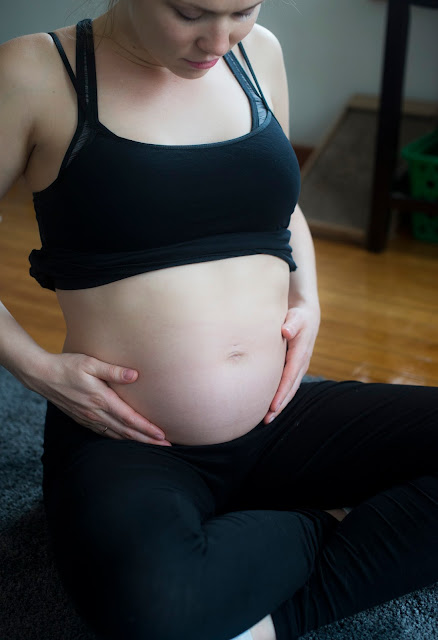